Can’t Learn to Live with Those Eye Floaters? 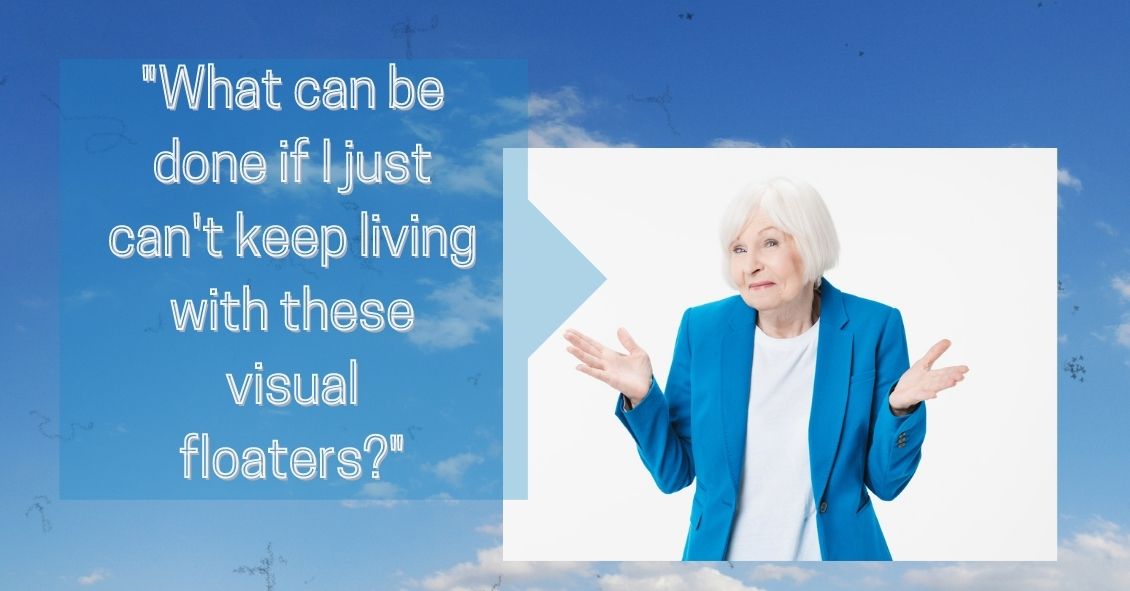 Do you have floaters in your vision?

Floaters are caused by thick areas in the gel-like fluid that fills the back cavity of your eye, called the vitreous.

Many people, especially highly near-sighted people, often see some degree of floaters for a good portion of their lives. Often, these floaters are in the periphery of your vision and may only be visible in certain lighting conditions. The most frequent conditions are when you are in bright sunlight and are looking toward the clear blue sky. This I know from personal experience as I have a floater in my left eye that I most often see when swimming outdoors. Every time I turn my head to the left to breathe I see this floater moving in my peripheral vision.

This is totally harmless other than when I’m swimming in the ocean and swear that sudden object in my peripheral vision is a shark bearing down on me. Some people who have floaters are not as lucky and the floater can be very central and almost constantly annoying, especially when trying to read.

The second scenario in which floaters occur is during the normal aging process.  The vitreous gel in the back of the eye starts to shrink as we age and at some point it collapses in on itself and pulls away from the retina. This sometimes results in a sudden set of new floaters.

When that happens you need to be checked for signs of a retinal tear or detachment.  As long as your retina survives that episode without any problems, the floaters themselves may stick around for a while and can be rather annoying.

Most people eventually adapt to the floaters; the brain learns to filter them out so you are no longer aware of them. The vitreous can also collapse more as time goes on and the dense floater you are seeing initially may move further forward and drop lower in the eye so the shadow it is casting is less intense and more in the periphery of your vision where it is much easier to ignore.

The first line of treatment for floaters has been, and still is, to live with them. Once you have your retina checked and there is nothing wrong there, the floaters themselves are harmless and will not lead to any further deterioration of your vision, which is why, if at all possible, you should just live with them. This is especially true if the floaters are new because the overwhelming majority of people with new floaters will eventually get to the point where they are no longer seeing them or at least where they are not interfering with normal daily activities.

If you have tried to wait them out and live with them but they are still interfering with your normal daily activities, you may want to consider having them treated with a laser.

This treatment is relatively new and involves using a special laser to try to break down large floaters into much smaller pieces that may no longer be visible. In a recent study of the laser treatment involving 52 patients, 36 were treated with the laser (a single laser treatment session) and 16 people had a sham treatment (meaning they went through everything the treated group did but did not actually have the real treatment done).  In the people who were actually treated, 54% reported a significant improvement in the floater symptoms while 0% in the sham group reported any improvement (no placebo effect). There were no significant side effects in either group.

Some points to note in the above study:

Fifty-four percent of people treated noted a significant improvement in their floater symptoms with a single treatment. That’s clearly not anywhere near a guaranteed improvement.

Other people have noted an improvement after more than one session, bringing the total expected improvement into the 70% range, with one or more treatments.

Another point to note is that there were no significant side effects to the treatment.

Although true in this small study, it does not mean that there are no risks to the laser treatment. Although rare, there have been reports of damage to the retina, optic nerve, or the lens of the eye.

In summary, this new laser treatment is a good addition to the tools to deal with significant floater problems. If you have floaters for at least six months and they are central and interfering with your normal daily activities such as reading or driving and you want to see if this laser treatment could be right for you, check with your eye doctor.