Is It a Drug Allergy or a Side Effect? 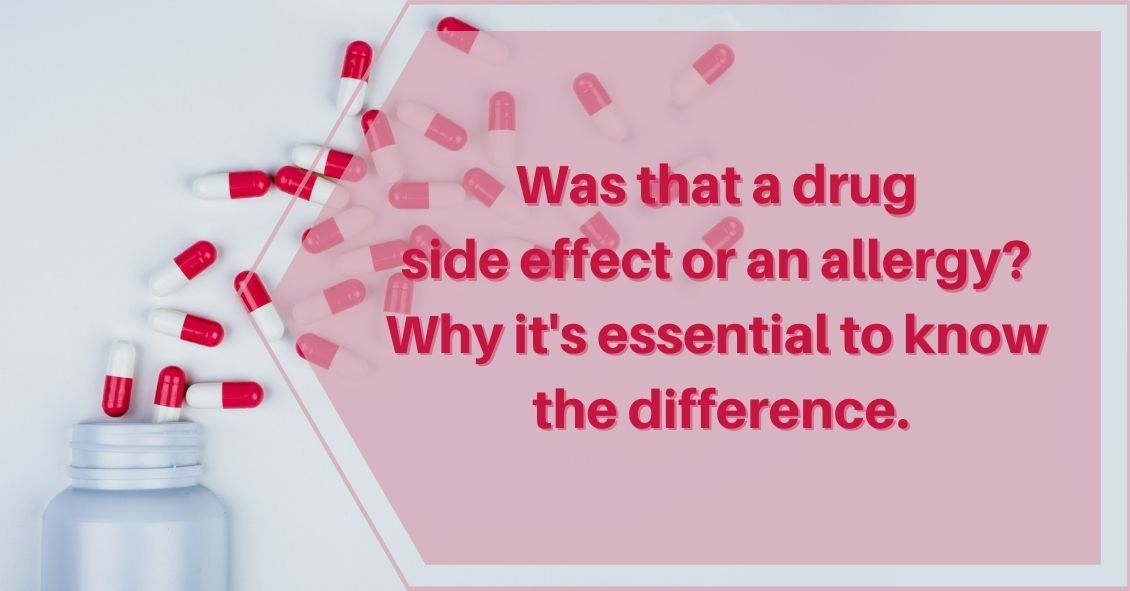 There is a common misconception that any adverse reaction to a drug is an allergy. That is definitely not the case.

Reporting to your doctors that you have an allergy to a medication when what you really had was a side effect could potentially create a substantial alteration to your medical care in the future. And this could mean a physician might avoid using a drug that could possibly save your life because of the fear of an allergic reaction.

An anaphylactic allergic reaction generally produces a very specific set of symptoms, including difficulty breathing due to constriction of windpipe, swelling of your tongue, and/or a rash and hives that break out over your body. While an allergic reaction can present in other ways, these are the most frequent reactions that occur when you have a true allergy to something.

It is not always just the patient who misdiagnoses a side effect as an allergy. Sometimes it is the doctor or the dentist who tells the patient, “You must be allergic.” This is a quick and easy explanation but not always the correct one.

In optimal medicine, there are not always a lot of “lifesaving” incidences but there are several drugs that are the preferred treatment for certain conditions and if you report an allergy to these drugs it may make your doctor use a much less effective drug.

Here are some specific examples of when a false report of an allergy may lead to less effective treatment or even failure to offer life-saving treatment.

The most common potential “lifesaving” drug to which patients sometimes report an allergy to is Epinephrine.

The story usually goes something like this: “I was having a dental procedure and soon after the dentist injected my mouth with a local anesthetic of lidocaine with epinephrine my heart started racing and pounding out of my chest and I almost passed out.” This hypothetical patient may come to the conclusion or the dentist may mention that the patient is allergic to epinephrine. That reaction is almost never an allergy but a side effect that occurs when a substantial dose of the lidocaine and the epinephrine gets into the blood stream and stimulates the heart.

The mouth and gums are very vascular, and it is easy to have some of that injection end up in the bloodstream, but that reaction is not an allergy and should not be reported as such.

Epinephrine is used to treat severe (anaphylactic) allergic reactions and not using it if you were to ever have a severe allergic reaction could lead to some very bad outcomes. This is not to say you can’t be allergic to epinephrine. You can, but it is extremely rare. If there is any doubt you should be tested by an allergist before you ever record yourself in a medical setting as being “allergic” to epinephrine.

Cortisone is a highly effective drug to treat many conditions. Again, it is unlikely but not impossible to be allergic to it.

We all have naturally occurring cortisol circulating in our bodies and cortisone is a very similar molecule but not exactly the same. Cortisone also can have a wide range of side effects depending on where and how it is administered

Some of the common side effects of cortisone, which have been mislabeled as an allergy, are: Making your blood sugar rise, insomnia, mood swings, nausea, and weight gain. These are all known side effects of the drug and not allergies. Cortisone side effects are associated with only certain routes of administration and are often dose dependent.

Why is this important in terms of your eye care? We often use cortisone derivatives, like Prednisolone, to fight inflammation that may occur in your eye, particularly after any ocular surgery. If you report that you are allergic to cortisone when you really only experienced a side effect we are going to have to use a less-effective medication to deal with your eye inflammation.

As I mentioned above, most side effects are dose dependent and the dose you got in a pill may have caused a side effect you’d rather not have again but the dose in an eye drop is significantly less and highly unlikely to give you the side effect you got with a pill taken orally.

People often report they are allergic to antibiotics when they really experienced a side effect.

The most common side effect with oral antibiotics is some type of gastrointestinal disturbance, like nausea, or diarrhea. If that was what you had and just prefer not to get that again you still shouldn’t report it as an allergy. If you do, then the drug can’t be used as an eye drop or ointment that might be the best treatment for your condition.

An antibiotic eye drop/ointment is very unlikely to produce the same gastrointestinal trouble that the same antibiotic gave you when given as a pill. You don’t want to take away the most effective treatment for your problem because you mislabeled a side effect as an allergy.

Most of the time with these drugs the issue is how you felt either during or after a procedure.

Why are these important? We can make you much more comfortable for a local anesthesia procedure if we can use some sedation. Using sedation may be better for you and the doctor performing the surgery because you are much less likely to move during the surgery if you are resting comfortably.

If you ever have an untoward reaction to a medication it is worth your time and effort to really probe into the issue to figure out if what you had was really an allergy or just a side effect because sometimes your life may depend on it.