Rheumatoid Arthritis, Hydroxychloroquine, and Your Eyes 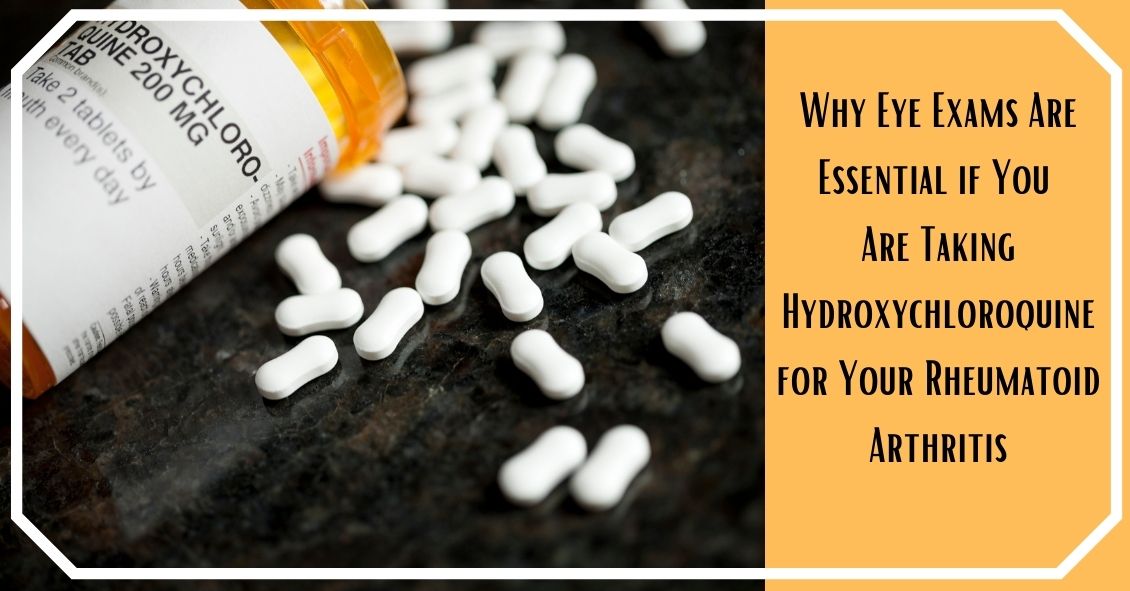 Hydroxychloroquine (Plaquenil) was originally used to treat malaria and is now used mostly to treat rheumatological and dermatological diseases. Its most frequent use now is for rheumatoid arthritis (RA) and Lupus and is often very effective in mitigating the joint and arthritic symptoms these diseases can cause.

One of the most significant side effects of the drug is its possibility of causing eye problems resulting in blurred or decreased vision. The most common issue is damage to the retina. It can impair your color vision or damage the retinal cells, particularly in the area right around the central vision.

In your retina, the area that you use to look straight at an object is called the fovea. The fovea is the area that provides you with the most definition when looking at an object. The area just around the fovea is called the macula and it has the ability to see objects with slightly less definition than the fovea but significantly better than the rest of your retina, which accounts for your peripheral vision. The most common place for Hydroxychloroquine to cause a problem is in a ring of the macula surrounding the fovea.

The reason it is important to detect any of these changes as early as possible is because in many instances the changes are not reversible even if you come off the medication.

The risk of this happening is highly correlated with the cumulative dose of the drug you have received. So, the higher the dose and the longer you have been on it the higher your risk.

The current recommendation is a daily dose that does not exceed 6.5 mg/kg/day (that is milligrams per kilograms per day).  There are approximately 2.2 pounds. in a kilogram.  The pills come in 200 mg tablets.  Most people who are on this drug are on either 200 mg once a day or 200 mg twice a day. The safety break point comes at around 135 pounds. People weighing more than that will stay within the safety guidelines (not more than 6.5mg/kg/day) at 400mg per day, but people under 135 pounds should probably only be taking 200 mg per day.

Other risk factors for Hydroxychloroquine retinal toxicity include kidney or liver disease and obesity. Obesity is a risk factor because the drug does not penetrate fat tissue so there is more of the drug in your lean body mass (including your retina and its supporting cells called the retinal pigment epithelium). What that means in real terms is that if you take two people who each weigh 140 pounds and put them both on 400 mg a day and one person is 4-foot 11 and the other is 5-foot 9, the 4-foot 11 inch person is at greater risk for side effects because the shorter person has more of their body weight in fat tissue. Since the hydroxychloroquine can’t penetrate the fat tissue that means there is a higher concentration of it in sensitive tissues like the retina.  People with kidney and liver problems have a tougher time eliminating the drug from their system so they are at higher risk because the body is going to retain more of the drug for a longer period of time.

The recommendation is to have a baseline eye exam with dilation and a visual field test before or soon after starting the drug. A repeat of that exam should occur every year if there is no evidence of toxicity.

The actual incidence of retinal toxicity from hydroxychloroquine is difficult to pin down because there is usually a long time between being started on the drug and the start of any identifiable retinal toxicity. The overall rate of probable retinal toxicity is in the range of 1 of every 200 people treated. The rate is much lower than that in the first 7 years of treatment but gets to about 5 times higher after 7 years of treatment. Some of that data is old now and there is much greater awareness currently about keeping people below that 6.5 mg/kg/day dosage level.

I have been in practice for over 25 years and have seen “probable” retinal toxicity from hydroxychloroquine a total of 5 times and only once in the last 10 years when people have been more careful about keeping the dosage in the right range.

The drug can be very effective in its treatment of RA and Lupus and the likelihood of serious vision problems is small and can potentially be avoided with the correct dosing and monitoring of the eyes. Other drugs in the treatment for RA or Lupus may have more frequent or serious side effects then Hydroxychloroquine so it would be wise to consider it a viable treatment option and not easily dismiss it because of the risk of what amounts to a fairly infrequent eye issue.