Shingles and Your Eye 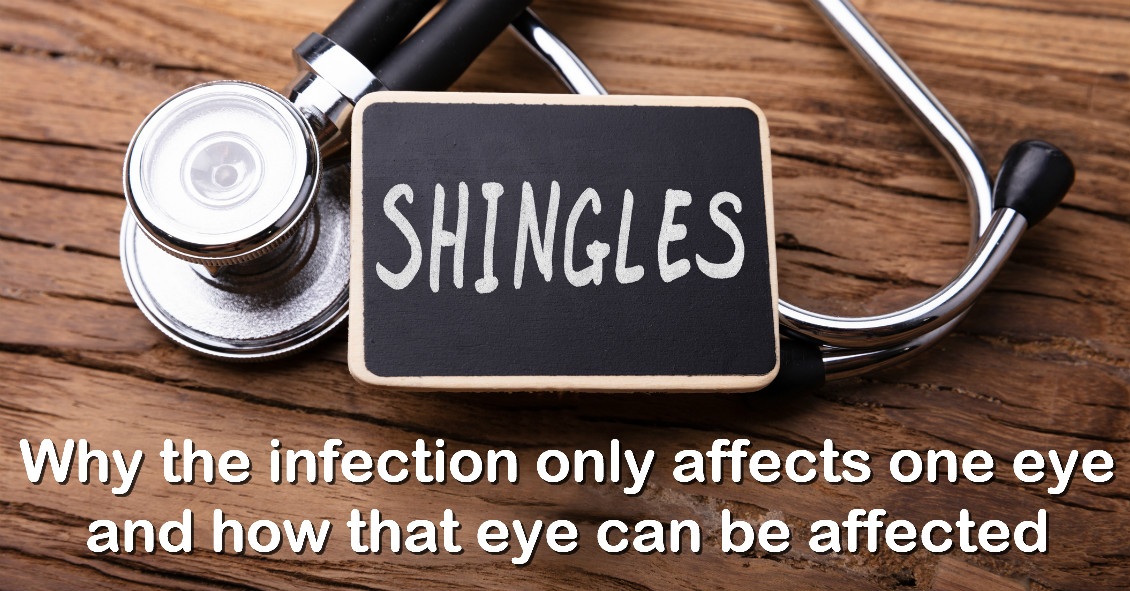 Shingles is the term we use to describe a condition that is caused by a re-activation of the Herpes Varicella-Zoster virus. The origin of this infection usually goes way back to childhood with a disease we know as “chickenpox.”

When you have a chickenpox infection your immune system manages to eventually suppress that virus from causing an active infection, but the virus does not get completely eliminated from your body–it is able to go and hide in your nerve roots.

Your immune system manages to keep the virus in check for most of your life but there may come a time in adulthood when your immune system is not working as well as it used to, and the virus can reappear. It usually does this along the distribution of a single sensory nerve called a dermatome.

The most common area for this to occur is along your trunk (chest or abdomen) but it is also commonly found on the face.

There are three branches of nerves that supply sensation to your face. They are all branches of the fifth cranial nerve. Those three branches supply the upper face (V1), the mid face (V2), and the lower face (V3).  Most of the time, shingles breaks out along only one of the branches at a time. The one that most frequently involves the eye is a rash breakout in the V1 distribution. This can involve the forehead and both the upper and lower eyelid.  It is also much more likely that the inside of the eye will be involved if the tip of the nose has a lesion on it.  The reason for that is that there is a specific subbranch of the V1 nerve called the nasocilliary nerve. This nerve is responsible for sensation on the tip of the nose and the inside of the eye.

The hallmark of shingles is that once the rash erupts it stays on one side of the body, including when it happens on the face. The rash will go up to the centerline of your face but will not go to the other side. You may get lesions on your scalp, but they will not show up on the back of your head. That is because the V1 does not go past half way back on your scalp. The back of your head has its sensation handled by nerves that come out of your spinal cord not cranial nerves that come out of the front of your skull.

Many people have a hard-to-describe sensation of pain, irritation, or itching along the distribution of the nerve for a day or two before the rash shows up. It is important to recognize the rash as quickly as possible because the drugs that treat shingles–usually Acyclovir, Famvir (famciclovir), or Valtrex (valacyclovir)–are much more effective if they are started within three days of the beginning of the rash.

Eye problems may occur along with the rash, especially if there is a lesion on the tip of the nose.

The two biggest problems are swelling or inflammation of the cornea and inflammation inside the eye, which we call iritis or uveitis.

The inflammation in the eye can cause pain and it can also increase the eye pressure and cause glaucoma. Most often the treatment for the eye problem is to use the same oral medication mentioned above and sometimes it also can require eye drops to decrease the inflammation the virus is causing (steroid drops) or drops to try and lower the elevated pressure (glaucoma drops).

The eye inflammation can cause blurred vision, pain, and significant light sensitivity. It can be hard to treat and control and can continue to be a problem long after the skin lesions are gone. In fact, many times problems don’t even start until the skin lesions are starting to go away.

It is recommended that if you have shingles effecting the distribution of V1 that you have an eye exam within a few days of the diagnosis being made and then again a week later because, as mentioned above, the eye problems can present a week later than the skin eruptions.

There can be some serious long-term effects of shingles on your eye including glaucoma and corneal scarring that can be bad enough to require a corneal transplant. The symptoms are often obvious with the vision being blurry and the eye being very red and painful, but sometimes the symptoms may be much more mild even when significant trouble is brewing inside the eye. So even if you think the eye feels fine, you need an exam to ensure there is not subtle inflammation or significant elevation of the pressure in the eye.

The other long-term problem with shingles around the eye is the possibility of there being ongoing pain in the area that can last for many years. This is called Post Herpetic Neuralgia (PHN). This pain can occur all along the dermatome where shingles had occurred. The eye itself may look perfectly normal but the pain persists. This is often treated with drugs that were originally developed as seizure medication but have since been shown to help alleviate neurological pain. The two most commonly used drugs for this are Neurontin (Gabapentin) and Lyrica (Pregabalin).

The most important thing you can do to try and make sure this doesn’t happen to you is to be vaccinated for shingles. The original vaccination called Zostavax has been available since 2006 in the U.S.  It is a single-injection vaccine and was recommend for everyone over 60.  The main issue with this vaccine is that it only reduced the risk of getting shingles by 51% and PHN by 67%.  In 2017 a new vaccine was approved in the U.S. called Shingrix. This vaccine is a two-injection vaccine with the second shot given 2 to 6 months after the first. This vaccine is recommended for everyone 50 years or older.  The big advantage of this vaccine is that is 90% effective in preventing both shingles and PHN. There have been some shortages of this vaccine since its introduction so it may take a while to get it but you should definitely do it when it is available.  For more information about this vaccine you can go to the CDC website by clicking here.