These weird spots and jagged lines are scaring me! 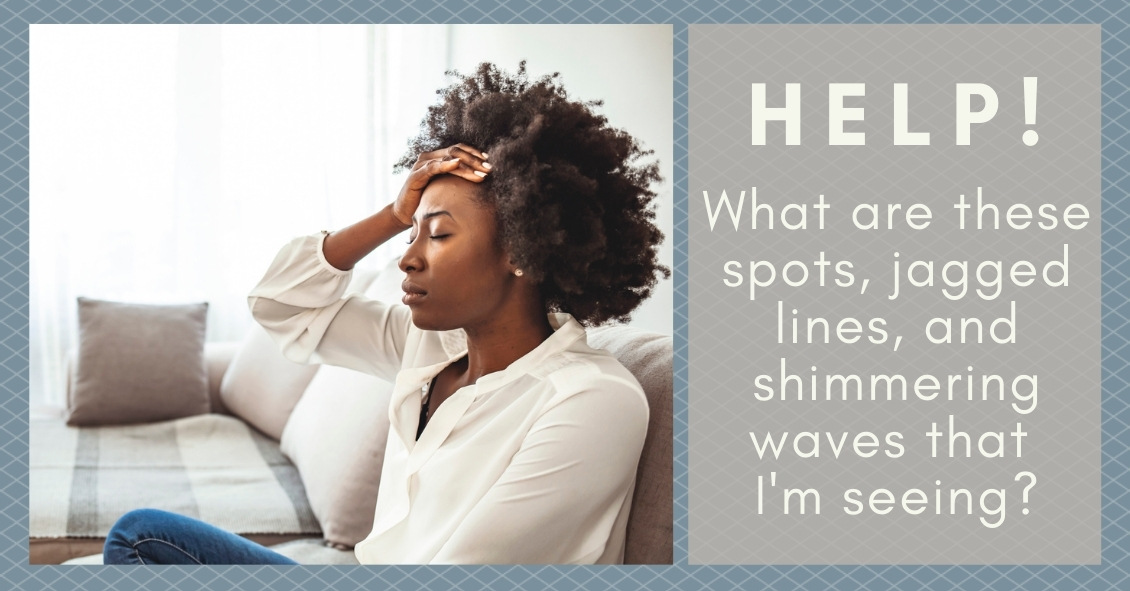 Have you ever seen a temporary black spot in your vision? How about jagged white lines? Something that looks like heat waves shimmering in your peripheral vision?

If you have, you may have been experiencing what is known as an ocular migraine. Ocular migraines occur when blood vessels spasm in the visual center of the brain (the occipital lobe) or the retina.

They can take on several different symptoms but typically last from a few minutes to an hour. They can take on either positive or negative visual symptoms, meaning they can produce what looks like a black blocked-out area in your vision (negative symptom), or they can produce visual symptoms that you see but know aren’t really there, like heat waves or jagged white lines that look almost like lightning streaks (positive symptoms).

Some people do get a headache after the visual symptoms but most do not. They get the visual symptoms, which resolve on their own in under an hour, and then generally just feel slightly out of sorts after the episode but don’t get a significant headache. The majority of episodes last about 20 minutes but can go on for an hour. The hallmark of this problem is that once the visual phenomenon resolves the vision returns completely back to normal with no residual change or defect.

If you have this happen for the first time it can be scary and it is a good idea to have a thorough eye exam by your eye doctor soon after the episode to be sure there is nothing else causing the problem.

Many people who get ocular migraines tend to have them occur in clusters. They can have three or four episodes within a week and then may not have another one for several months or even years.

There are some characteristics that raise your risk for ocular migraines. The biggest one is a personal history of having migraine headaches. Having a family history of migraines also raises your risk, as does a history of motion sickness.

Although the symptoms can cause a great deal of anxiety, especially on the first occurrence, ocular migraines rarely cause any long-term problems and almost never require treatment as long as they are not accompanied by significant headaches.

So if symptoms like this suddenly occur in your vision, try to remain calm, pull over if you are driving, and wait for them to go away. If they persist for longer than an hour, you should seek immediate medical attention.