What Tests Might You Have During Your Eye Exam? 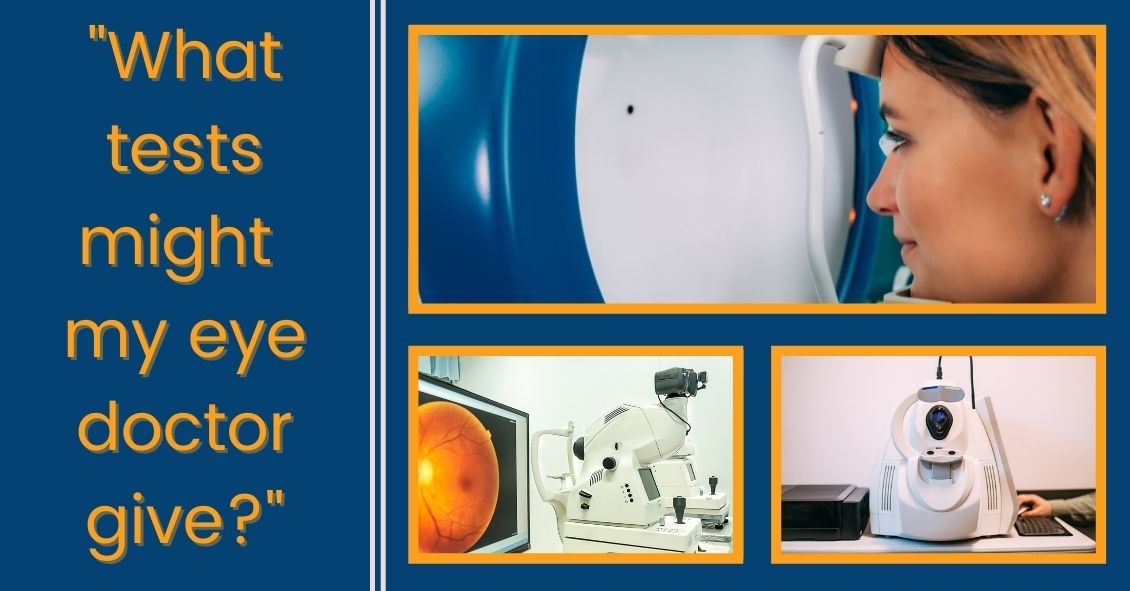 If it's been a while since your last eye exam–or if you've never had one done–it's always nice to know what testing you might have done and what issues the eye doctor looks for.  Here's the scoop on some common testing…

The visual field test is designed to check your peripheral vision, which isyour ability to see things where you are not directly looking.

When we test your vision on the basic eye chart, we are testing how well you see right in the center and it gives us no idea if you can see out away from the center. Your peripheral vision is very important because it gives you the ability to move around your environment without running into things.

The main culprits that can have a big impact on your peripheral vision are glaucoma, some retinal diseases such as retinal detachments or retinitis pigmentosa, and some neurological problems like brain tumors, strokes, pseudotumor cerebri, and multiple sclerosis.

Many patients get anxious when they take this test because everyone wants to do well on it. That sometimes results in people not staring straight ahead but trying to look around to find the lights in an effort to do better.

That just makes the test come out worse. The machine also makes some noise as it changes location of the test light. Some people start pressing the buzzer whenever they hear a noise. They think there must be a light they missed but the machine, several times during the test, makes noise and then doesn’t put a light on to specifically see if you are trying to cheat by hitting the buzzer on the noise rather that seeing the light. Please don’t do those things – you are only cheating yourself and making it more difficult to figure out your problem.

The OCT really took hold in eye doctors' offices at the beginning of this century. It was the first time we were able to see anatomy and pathology inside the eye on a microscopic level without the use of any radiation.

It has been a great addition to our examination techniques and allowed us to see many causes of vision loss at a level of detail we never had before.

The two biggest uses for OCT in optical health are diagnosing diseases of the retina, particularly the area of central vision called the macula, and for diseases of the optic nerve, the most common of which is glaucoma.

For retinal disease it has been extremely helpful for macular problems such as macular degeneration (the leading cause of blindness in the U.S.), diabetic retinopathy, retinal vascular occlusions, and retinal swelling from inflammation.

The difference between those two locations can have a significant impact on what disease is causing the problem and what the proper treatment is. The OCT is also helpful in following the effect of treatment. If you are treating a bleeding or swelling problem in the retina, the OCT can track the degree of improvement with a level of detail that could never be matched by the human eye.

Fundus photography is just that, a regular picture of the inside of your eye. The pictures highlight the appearance of the macula and the optic nerve and record it for prosperity.

As eye doctors we make notes in the medical record of what we see when we look in the eye. The wording of anything that looks abnormal with the retina or optic nerve does vary somewhat from doctor to doctor. One of things we record is something called the cup to disk ratio (C:D) of the optic nerve. We express that ratio as a percentage. Normal is about 30% or .3. The range of normal is very wide and some “normal” eyes have a .1 cup and others can have a .7.

In glaucoma those percentages get larger over time as the person loses nerve tissue. So, if you were born with a .3 cup but in your 60’s you were found to have a .5 cup that would be a strong indicator that you might have glaucoma.  However, if you were born with a .5 cup and at 60 you still have a .5 cup then you don’t have glaucoma.  When you look at someone at 60 with a .5 cup it’s hard to be sure if this is normal for that person or did they progress from a .3 cup to a .5 cup.  If only I had a picture …

Pictures of the back of the eye really do tell the story better than words. I can describe what the C:D looks like to me but a different doctor may describe it differently. Doctors are usually fairly consistent in their estimate of the C:D when it is the same doctor watching that C:D over time. When a different doctor estimates the C:D that consistency is just not there. My .4 C:D may be my partner’s .5. But you can’t argue with the picture.

The same thing occurs with retinal bleeding. Rating the amount of bleeding as mild, moderate, or severe is somewhat helpful but there is a broad range of “mild” or “moderate”. When comparing two pictures taken at two different points of time it is much easier to decide if something is really getting better or worse.

We also use fundus photography to keep an eye on small tumors, called choroidal nevi, that can develop in the eye. These are increased areas of pigmentation under the retina in an area called the choroid. Most eye doctors explain these pigmented spots as “freckles in the eye.”  Most choroidal nevi are small and fairly flat. They can, however, sometimes grow larger and rarely turn into a melanoma in the eye. Serial photographs are very helpful in watching the lesions for growth.

These three tests – visual field, OCT, and fundus photography – make up the core of our testing. There are many other tests that can be performed along with your eye exam but these three we described here probably make up about 80% of the tests you may encounter, depending on your eyes.